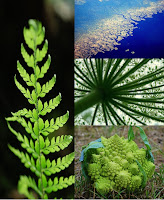 
A fractal has been defined as "a rough or fragmented geometric shape that can be split into parts, each of which is (at least approximately) a reduced-size copy of the whole," a property called self-similarity.


Fractals are formed by various types of mathematical repetition and can be found in many aspects of nature such as clouds, snowflakes and plants.

One of the wonderful things about fractals is that they look the same at different scales – this is particularly true of certain types of fractal such as the Koch Snowflake and the Sierpinski Triangle which are created by the repetition of simple mathematical rules. These are the same sorts of rules that can be found for naturally occurring fractals.


So what, I hear you ask, has this got to do with democracy?

Well, it occurs to me that fractals might provide a rather neat way for establishing democratic structures based on the following two principles:

1. Exactly the same democratic structures should be repeated at every level of government


So, for example, if the UK parliamentary arrangements are in fact ‘the envy of world’ then they should be replicated at every level of government. This already true to some extent for the devolved administrations but is certainly not for local government or town and parish councils (I have posted about local parliaments before). It doesn’t have to be that system of course, it could be a different one, but there has to be ‘self similarity’ at every level.


2. The distance between different democratic levels should be decided by a simple mathematical rule

Instead why not have a mathematical rule for deciding distances? Here is an example using ‘divide by 21’ to illustrate this:

I wondered whether you could use Fibonacci numbers but I’m not sure my maths are up to the task!

Once again a fascinating blog post Dave (really enjoy this blog so thank you).

One thing about using fractals for government organisation is that society is rarely so ordered and defining boundaries in such a way would not reflect this. For instance, I think the argument for defining local government boundaries along economic footprints has much to commend it. How this would be done in practical terms is a tough one (as our neoliberal economy would require a fluid governance structure - changing decade to decade).

I'm glad it got you thinking - I have to say I thought there was an idea in here somewhere although I'm not sure I got it out.

One of the fascinating things about fractals, it seems to me, is that they sit behind things that look dis ordered - I'm not sure how that helps with defining democratic footprints, but there you go. I wonder if economic development reflects these types of patterns though?

Perhaps the more interesting point is that the relationship between different democratic levels is arbitrary to say the least and it would be satisfying to have some principles at work to inform governance - fluid or otherwise.

Thomas Jefferson - On Dividing Government Entities
"The way to have good and safe government is not trust it all to one, but to divide it among the many, distributing to everyone exactly the functions in which he is competent ... [more] ... It is by dividing and subdividing these Republics from the great national one down through all its subordinations until it ends in the administration of everymans farm by himself, by placing under everyone what his own eye may superintend, that all will be done for the best."

Moses was told by his father in law that trying to govern the whole people by himself would fail. He suggested fractals (not by name!). He said captains over tens, over fifties, over hundreds, and so forth.

AS OUR POPULATIONS GROW WE MUST LEARN TO DIVIDE, just like cells do as a body grows. We would not function well as one big cell! That is what communism and socialism try to do - centralize everything, one nucleus. Their proponents are afraid of all the individual groups governing themselves. They want to do it all the same way in centralized control. When a civilization does this, it dies, in all of recorded history.

The way to perpetuate civilization and freedom is to use the idea of fractals in government. Divide governing units as they grow to a certain size and continuing to repeat that as they grow. Push the governing to the smallest grouping. That is what will grow people into self governing, able-to-be-free people!

Research and commentary on this subject, including the Jefferson quote, can be found at www.smallerschools.org.

Thanks for this David - I really like the Jefferson quote - it's a great addition to the post. I wasn't familiar with it before and I'm sure I will use it in future. I can see from your website that this is something that you are passionate about.

You make some big generalisations about centralisation, communism and socialism though - not sure everyone would agree :)

E.F. Schumacher makes a similar argument in 'Small is Beautiful' - his treaty against gigantism and globalisation. He agrees with Jefferson to a certain extent in the way that we need to go back to the human scale to make things meaningful once again. He would, I believe, disagree with the principle of fractuals however, as this quote would suggest -

" A given political unity is not necessarily
of the right size as a unit for economic
development. In this matter of appropriate size it is not possible to give hard and fast definitions.

Much depends on geography and the local circumstances. A few thousand people, no doubt, would be too few to constitute a 'district' for economic development.

But the community of a few hundred thousand
people, even if fairly widely scattered, may
well deserve to be created as a development
district."

His ideas on 'intermediate size' are well worth considering and argue that human administration must occur organically and due to circumstance rather than defined by a mathematical formula.

Yes, I'm sure a pure mathematical approach is unworkable. Perhaps organic fractals are still possible though. After all, tress, plants etc grow according to these general principles but are never regular. Climate, obstacles and other conditions all play a part.

The fractal component could of course be related to the procedural rules on each level of government. Accountability, transparency, representation, and so on. Emergent properties at higher levels of governance could the result.