Community planning (a.k.a. producing a community strategy for a local council area) is one of the things I’m involved in doing for my own authority.  If you have been involved in this type of process, either supporting or as a ‘stakeholder’ you will know what a challenging area of work it is.  The expectation is that local needs will be mapped, the public consulted and all relevant agencies and organisations engaged.  This is, as you might expect, quite a challenge.  While producing a community strategy is actually relatively straightforward.  Producing something that is meaningful and that makes a difference is a lot, lot harder.

I would point to two particular problems.  The first is that community strategies tend to be all encompassing and will include all of the priorities of the major public bodies in an area without every really prioritising or creating a genuinely new focus.  They often don’t prioritise at all.  The second is that they tend to be generic.  It is hard to distinguish the vision, themes and actions plans in one area from another – maybe this is because everywhere has the same problems but maybe it has something to do with the process.


Recently I’ve come across an organisational development method called appreciative inquiry and it is something that I find really interesting.  The idea here, then, is to apply this approach to community planning to come up with a different type of process – let me know if it has been done before.


I’m no expert on appreciative inquiry but, if it is not something you are familiar with, and it sounds of interest I’d urge you to research it further.


Essentially it is an asset based rather than a deficit model of development.  In other words instead of asking ‘what’s wrong and how can we fix it?’ the question is ‘what’s good and how can we have more of it?’.


Here is part of the Wikipedia entry (there are loads of other things to look at but I thought that this was quite a nice starting point):

Appreciative Inquiry attempts to use ways of asking questions and envisioning the future in-order to foster positive relationships and build on the present potential of a given person, organisation or situation. Applied research has demonstrated that this method can enhance an organisation's internal capacity for collaboration and change.  Appreciative Inquiry utilises a cycle of 4 processes, which focuses on what it calls:

The basic idea is then to build - or rebuild - organisations around what works, rather than trying to fix what doesn't. AI practitioners try to convey this approach as the opposite of problem-solving. They take a positive focus on how to increase exceptional performance instead of improving poor skills and practices. AI assumes that this line of reasoning is motivational. Progress does not stop when one problem is solved: it naturally leads on to continuous improvement. 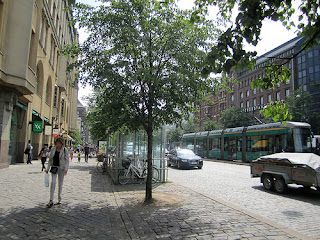 
DISCOVER:  Finding out what is good about an area, what the public like, what services and initiatives work well, what are the strengths of the local economy

DREAM:  Similar in some ways to the visioning process associated with community planning but done properly.  Rather than trying to boil down every aspiration down into a single sentence (‘a healthy, green, prosperous, fair and equal place’), giving people a chance to express themselves and collecting a wide range of ideas.

DESIGN:  A regularly updated statement of the services and processes that need to be valued and supported and of the new projects that can develop the assets (in the widest sense) that an area values.


DELIVER:  The activity of doing the things that have been agreed.


There are a number of things that I think will be helpful about this approach:
As with old style community planning, appreciative community planning doesn’t prevent the majority of services in an area being delivered as usual and the things that need to be done by law would still get done. It is an evolving means of social and economic development in which the whole community can be involved. Well, that’s the theory anyway.

I like this idea Dave, we are thinking along similar lines in Wiltshire using ABCD (Asset Based Community Development). That is, mapping and linking up social capital - people, assets and opportunities. There is a germ of something very interesting here, but it is a challenge for social policy practitioners stuck with the 'evidence led' empirical mentality. We have Cormac Russell coming to talk to our elected members in Feb and we are looking to kick start the ABCD approach from that. Would you like to come along?

Thanks Steve, good to hear I'm not alone on this one!

ABCD sounds intriguing - don't I think I'll be able to get there in person but would love to find out more - perhaps you will be able to share something somewhere online?

Better than that - here is a link to the experts