In this post I want to argue for an approach to community programmes very different to the approach I've been used to.

Specifically I want to suggest that, instead of setting up community regeneration partnerships or projects that look to fix something about a community, we should instead be looking to set up organisations that look to fix the way services are provided to that community. 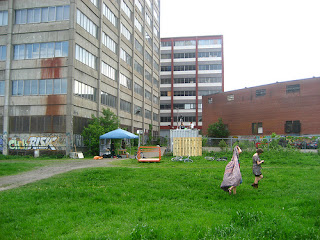 We Need to Talk About Community Regeneration

When we use the term ‘community regeneration’ we are immediately implying that the problem is with ‘the community’ and that it is ‘the community’ that needs to be fixed. The term is already taking our attention away from society as whole and ‘system wide’ issues such as inequality.

As a consequence interventions will often be special activities that are only applied to that community such as partnership boards, community centres, capacity building projects etc etc. While I’m sure these things are all valuable in their own right, what the Marmot Review tells us is that, if we are serious about tackling inequality, then we need to be thinking about proportionate universalism, not interventions that focus only on the most deprived.

It is also worth pointing out that the effectiveness of community regeneration programmes is highly questionable. As Alasdair Rae argues, Governments have not been good at learning from research. If they were it might help them to locate area based programmes much more effectively in broader social programmes. As a result objectives have often not been met.

For me co-production means that all public services depend on the contribution of both the service provider and on the contribution of the public. It is the relationship between provider and public which determines the extent to which the assets of both are utilised and the subsequent effectiveness of the service in question. If you start from this perspective it comes as no surprise that services ‘delivered’ equally to all can nevertheless result in an inequality of outcome. What you get is a co-production deficit because some people are able to get more out of services than others.

Hastings and Mathews have been doing some really interesting research that highlights the various ways in which the middle classes are able to reap the benefits of services more efficiently than the working classes through, for example, joining groups such as parent teacher associations, complaining effectively and interacting with bureaucrats, teachers, doctors etc who are usually middle class themselves.

On the other side of the coin I was really struck by this piece by Clare Galloway. It illustrates perfectly what happens when the relationships between providers and public break down. More than that it shows how an inflexible and judgemental service delivery culture can actively work against effective co-production by stifling attempts to make things better. There is also a well made point in this piece about people being expected to work as unpaid volunteers to sort out community ‘problems’; work that we normally expect paid professionals to do.

My argument is that, instead of regeneration partnerships, we need co-production trusts; organisations that seek to reduce the co-production deficit by working on behalf of deprived areas so that they can see the same service benefits as middle class areas, that they can achieve equality of outcomes. Such bodies would be consistent with proportionate universalism and would contribute to system wide approaches.

I have three suggestions about what co-production trusts might do in practice.

The trust would act as a lobbying agency on behalf of the community, campaigning for equality of outcomes and higher levels of service where this is needed, ensuring that policy makers are fully aware of the community and its needs. Making sure that environmental services are targeted in the right way, getting involved in the planning process and arguing for accessible facilities. As with any advocacy, this work would be done by specialists who work to the instruction of their clients; the community.

The trust would act as a ‘dating agency’ for referrals. Again, acting only with the permission of those affected, arranging appointments and even attending alongside if that is something people wanted. More generally the trust would be able to identify potentially useful services and share this with the community. This all about ensuring that services are getting to where they are needed and to where they can have the most impact.

The trust would act as ‘marriage guidance counsellor’, seeking to improve the overall relationship between providers and public. In part this would be about awareness raising and training for public workers (something Hastings and Mathews have suggested), in part this might be about offering advice to residents about how to get the most out of their services. This might also be a form of mediation; getting people together to explore how things might work differently.

As organisations these trusts should be democratically connected to the communities that they are working for including being properly linked to local politicians at all levels.

The one bit of this I’m sure isn’t right is the name 'co-production trusts' - lets just call them something else when we are out in the real world...