I was reading some G.D.H. Cole recently, out of passing curiosity really, and I came across his idea of Moot Halls and I thought it was a great one to include on this blog.

G.D.H Cole was a left wing academic with a strong belief that you could change the world through education.  You can find his Wikipedia page here.

Cole’s democracy could perhaps be characterised as an aversion to big government and a preference for smaller associations, either at work or in the community.  For Cole local government in urban areas, because of its size, had become as distant from ordinary people as national government.  In the face of this, the problem for Cole was ’to find democratic ways of living for little men in big societies’. For him:


Democracy can work in the great states...only if each state is made up of a host of little democracies...

Three of his assumptions in particular are interesting for local democracy:

Cole describes the idea of Moot Halls in his 1941 essay ’The Essentials of Democracy’:

I am suggesting that there ought to be for every street, or little group of streets, for every block of flats, and, of course, every village and hamlet a regularly recognised, neighbourhood group, with a right to discuss and resolve upon anything under the sun.  I am not merely suggesting that this should happen: I say it ought to be made to happen.  Every new group of streets we build ought to have its little Moot Hall for such assemblies of its people, ought to have its little centre for their communal affairs. 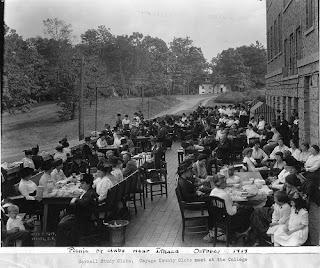 Wider than their democratic purpose, Cole suggested that Moot Halls should have other functions such as childcare centres, cafes, bakeries, and social clubs.    In this context Moot Halls sound similar to many of the centres opened through modern regeneration projects - although these don’t have the democratic function (perhaps they should).

Personally I love this idea and would like to see it considered as something that might be included in every new development; a kind of democratic planning gain.

Interesting Dave. What do you think of this idea I have been kicking around for a few years? https://www.spacehive.com/meetingpoints