56. Be a Fascinated Friend Not a Critical One 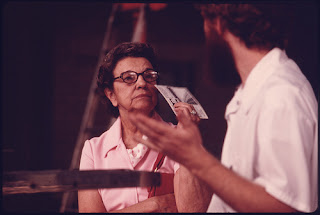 The critical friend concept is one we work with a lot in scrutiny.  I think that the concept is essentially a sound one, you sign up to sharing the same aims as the person you have 'befriended' but you come with an independent eye and suggestions for how they might improve.

But it never completely worked for me.  I always picture a friend stood in the hallway, arms crossed, telling you that your picture is crooked.

I remember hearing a presentation from Sir Michael Barber a few years back about the Prime Minister's Delivery Unit.  This was the team set up in the second term of the last Labour government by Tony Blair.  If I recall right it was set up in response to criticism that government policies were not having the bite that they should and that targets were often not being met. The unit's role was to track departmental targets and intervene where needed.

The thing that has always stuck with me from this presentation was the attitude taken to missed targets.  Instead of saying 'oh crap', the unit's response was 'how fascinating'.  Their aim was to try and help analyse the problem and hopefully work with the department to solve it.

I think there are a number of corporate teams that could learn from this.  Instead of responding to a 'failure of compliance' with "you have messed up, sort it out" they might respond with "how fascinating, how can we help?"

I think the same point can be made in terms of scrutiny.  Here it is the idea of 'challenge' that sometimes underpins the critical friend role that makes me a tiny bit uncomfortable.  It's the idea that telling people they are not doing well enough will be enough to spur them on to do better. OK it is usually more constructive than that and will come with a few helpful suggestions but that tends to be the basic idea.

An alternative approach would be to reserve judgement (and maybe suspend it entirely) until time has been taken to explore the issue fully and in a spirit of cooperation, bringing something new to the party, not just a fresh perspective (although this is important) but maybe some new resources or raised awareness or even some new allies.

This is being what we might call being a fascinated friend rather than a critical one.

Or, going back to the friend in the hallway, one with a spirit level.

Email ThisBlogThis!Share to TwitterShare to FacebookShare to Pinterest
Labels: scrutiny