58. Don't Overlook Scrutiny if You Want to be Innovative 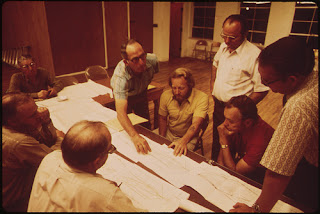 Necessity is certainly the mother of innovation as far as local government in the UK is concerned.  Caught in a pincer movement between increasing pressures on public services and reducing resources, Councils need to be ever more creative with what they have.

No wonder innovation is such a hot topic at the moment.

A lot of the debate seems to be about how we get more innovation from the frontline.  Fine.  But where are the big ideas going to come from?  The ideas that are going to bring about the major changes that are needed.

A recent (and well worth reading) report from NLGN on this topic concludes that while councils are confident about their capacity to innovate they are nevertheless worried about the pace of change.  The report argues that 'local government is going to need a lot more support if it is going to innovate its way out of austerity'.

I'm not so sure that local government is making the most of the resources it already has.

One obvious place to look is scrutiny.  Any scrutiny function worth its salt will have all of the qualities needed to generate the ideas that local Councils are going to need.  These include:

What surprises me is how little scrutiny seems to feature in debates about innovation in local government.  I have even seen it described as a barrier with its emphasis on public accountability contributing a culture of risk aversion.  Well maybe there is an issue for scrutiny there and perhaps supporting a culture of innovation means being less critical and more fascinated.

Nevertheless, what we need is a culture of challenge and debate if innovation is going to genuinely flourish.  Scrutiny has the right credentials to be right at the heart of such a culture, generating the new ideas that local government is going to need.

Surely worth thinking about?