96. Another 32 public engagement ideas for scrutineers to try 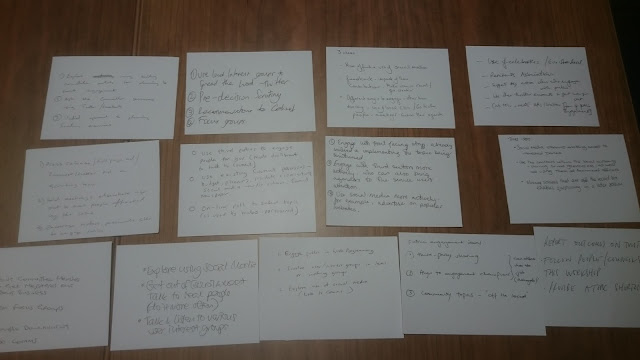 This is the write up from my Purposeful Public Engagement Workshop at the 2016 Centre for Public Scrutiny Annual Conference: ‘Democracy, governance and the truth’.

I have to say I thoroughly enjoyed the event as a whole – some excellent speakers and an opportunity to take stock of the rapidly changing environment we are all working in whether in terms of devolution, democratic renewal or the need for a digital mindset.

My workshop was of a more practical nature - and a big thank you to everyone who came along and contributed.

Public engagement with scrutiny is challenging for everyone and each of the participants was certainly able to point to something that they wanted to improve.

I started with the assumption that there was plenty of good practice already in the room for people to draw - what the session could usefully do, therefore, was share it.  I’m delighted to say that this assumption was right and, by focussing on ‘what works’, we learnt about some great examples – even from the people who felt that they weren’t doing much – it turned out, in fact, that they were!

Anyhow, my suggestion at the start was that everyone should identify at least three ideas that they could take back to their organisations and try. These were captured on postcards and, before I post them pack to everyone, here is a list of those ideas.  I’ve captured some of the other good practice examples at the end as well.

I also fed in some of the ideas that we have borrowed from the National Assembly for Wales (see here and here) and some of these were also picked up by participants.

Of course not everything will work for everyone but hopefully the list will give you some inspiration for things you might want to experiment with – or even perhaps remind you about the good stuff you are already doing that you might want to do more of.

So, the ideas that participants were going to try:


Some other ideas that didn’t make it to the postcards but are still worth sharing: