I’ve just come across a paper by Rod Rhodes.  It’s called ‘The Lost World of British Local Politics?’ and was published in 1975 in Local Government Studies.  It essentially provides a mapping of what was the then emerging study of local government.

The thing that caught my eye was a table showing the local government case studies that had been completed by academics up until 1974.  A couple of them can be found on my page of local government classics.  Here is a selection of the county boroughs to give you an idea: 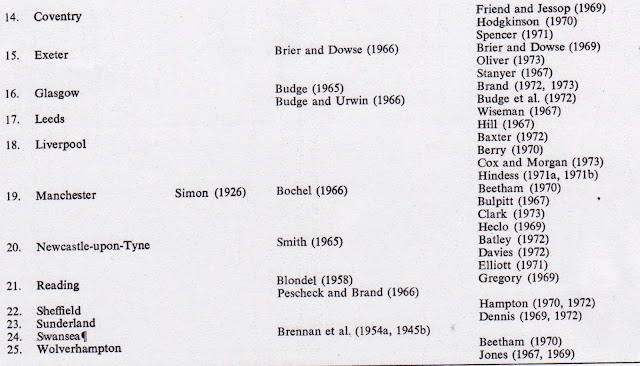 I have no idea how many new studies have been completed in the nearly 40 years since then (or even if more recent maps have been produced) – but I do think it would be great to have an up to date version, say as an online database, which could be used to find all the academic case study work that had been done on any given council.

This would obviously be a really handy research tool but I also think it would have real benefits for local councils.  Local government is not good at preserving its history and such a database would help councils to understand their own story.  Case studies provide rich pictures of days gone by that some or all of the organisation may have forgotten about.  Often we are not talking about that long ago.

These case studies can also provide useful external perspectives.  They will include the conclusions and critical reflections of independent researchers and they might just offer some useful challenge.  Who knows, they may even shed light on current problems or provide some relevant and useful evidence.
Project anyone?
Posted by Dave Mckenna at 22:04