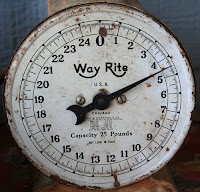 The answer is nothing as far as I know.

The purpose of this post, therefore, is to share the crude scale I’m using to describe the value of the outcomes from participatory initiatives on policy and decision making.  It is very much a work in progress so please feel free to suggest improvements!

My Kind of Outcomes

Public participation initiatives, such as citizens’ panels, area forums, focus groups etc, will normally consider issues, relevant to policies or decisions being considered and will produce outcomes.  By outcomes I mean opinions or proposals that might be captured formally through minutes or reports, or informally by decision makers, perhaps councillors, being present and taking conclusions away with them.  These outcomes are the policy products of participatory initiatives.

While I am only really interested in those outcomes relevant to policy and decision making there are of course a wide range of other outcomes that can be evaluated, sometimes it seems, to the exclusion of the ones I’m interested in.

I’m not going to get into the whole thing here.  If you want to see the whole picture then Tina Nabatchi has produced a very useful ‘Manager’s Guide to Evaluating Citizen Participation’ that you can download here.  It gives a very good feel for the challenge of evaluating public participation, as she says:


Nabatchi’s guide also highlights some of the specific challenges associated with evaluating the specific type of outcomes I’m interested in:

...there are difficulties in demonstrating causal links between participation and policy outcomes, in part due to the time lag between processes and policy or public action, as well as intervening events. There is also considerable ambiguity about what would constitute a substantial impact, which means that impact must be considered in relation to the initial goals of the participatory program. Finally, scholars and practitioners are still devising methods with which to better examine the links between public participation processes and public policy changes and action.


This then, is my attempt to try and address those challenges.

For my scale I have borrowed from this paper by Paul Burton on measuring the benefits of public participation.  In particular two of the ‘strands’ he argues need to be considered when conceptualising participation.

The first strand is the level or scope of the decision:  Burton describes the possible range like this:

At one end of the continuum are decisions that affect everyone in a particular constituency or jurisdiction, while at the other end are those affecting only a few.

The second strand is what Burton calls the participatory relationship, in other words:

the relationship between those people who choose to or are invited to participate and those who retain formal responsibility for making the decision in question. At one end of the spectrum formal responsibility for taking a decision is handed to all participants, for example in a referendum, while at the other end participants are allowed only the most cursory degree of involvement and in ways that have no meaningful impact on the decision taken.


Again, to simplify, and to place this in a local government context, I’ve distinguished between those cases where the difference made is decisive and where the initiative has been informing.

From a councillor perspective these two categories are the flip side of two classic representations of the councillor role.  For those councillors who see themselves as trustees, in other words, elected to follow their own judgements, the informing relationship is likely to fit more comfortably.  For those that sees their role as one of delegate, closely representing the views of the public, a more decisive influence might be more likely.

Putting the two strands together generates four types of value and looks like this: 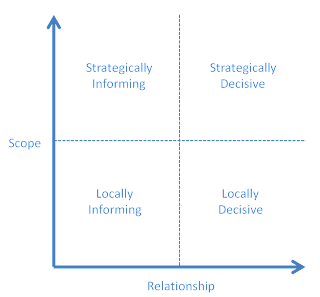 I then translate this into a four part scale as follows:

1.  High Value (Strategically decisive)
Outcomes either substantially change the intended decision / policy or bring a clear direction where the way forward was in doubt.  We would expect this to happen in connection with council, cabinet or even strategic partnership meetings.

2.  Medium Value (Locally decisive; strategically informing)
A substantial change or a clear direction is affected at a local level through say an area committee.
Alternatively the influence is council wide and the outcome has been clearly taken into account but as one of many considerations of which others were decisive.

3.  Low Value (Locally informing)
The outcome has been clearly taken into account by local councillors or officers acting locally but it cannot be said to be decisive.

4.  No Value (Neither decisive nor informing)
Nothing has happened as a consequence of the outcome.

I appreciate that this scale is a crude one that plays fast and loose with many subtleties and is likely to be highly subjective in its application.  No doubt it could also be improved. Nevertheless I believe it at least goes someway to describing something which has (probably) never been properly described before.