In this post I argue that public sector practitioners and academics need to be investing in semi formal communities in order to bridge the gap between their two worlds.  Such communities can foster the interpersonal networks needed to generate the trust, common understandings and shared priorities on which effective co-learning and co-research can develop. 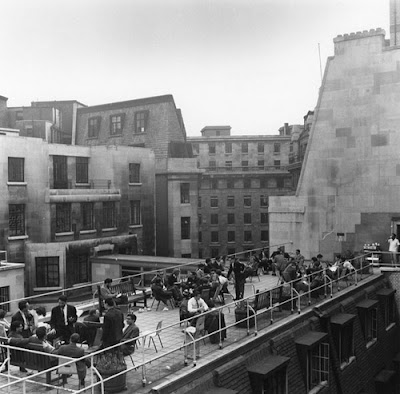 Bridging the Gap between Practice and Academia

As a full time practitioner doing a part time PhD I often find myself hopping between the worlds of local government and academia.  I also like to visit some of the places that exist in-between.  The Public Administration Committee conference, for example, is an annual theory and practice forum that I have personally found extremely useful as a place to develop my academic understanding and confidence (I sketched out the ideas for this post on the train after the last one).

The problem is, however, that events such as the PAC conference are the exception rather than the rule.  I read with great interest this piece by Kevin Orr and Mike Bennett on the hidden politics of 'co-production' in research which confirmed my belief that one of the biggest challenges in this context is indeed ‘the distance between the academic and practitioner worlds’.  This is something I picked up in a small way in this paper I did on local government attitudes to research degrees (pdf) that I presented to the PAC conference in 2009.  In a similar vein this is my Prezi to a workshop for the annual Centre for Public Scrutiny conference in 2010.  My general argument is that while local government doesn’t really ‘get’ academia, at an individual level it something we often value.  Differences therefore relate more to misunderstandings that to something more fundamental.

This distance between the two worlds is a big missed opportunity in my opinion.  While academics are increasingly concerned about the impact of their research so public sector practitioners are concerned about wider outcomes in the community. While academics are being asked to become more ‘real world’ by their funders and institutions so practitioners are under pressure to employ evidence and critical thinking more than they ever have done before.  While austerity has severely limited local government’s ability to spend money on training, courses or events so those involved on the academic side live with uncertainty about whether they fit with the priorities of their institutions and wrestle with the future relevance of their disciplines.

How then to build better bridges between practitioners and academics?  I think the answer is to invest in the setting up and support of Learning and Research Communities.

This idea of community is borrowed very much from the world of social media (see my previous post on Social Bureaucracy).  It implies something informal, fluid and flexible, something that has a focus on relationships between individuals rather than between institutions and social rather than contractual interaction.   Communities can be porous, overlap and interact.  They imply a sense of shared identity, purpose and belonging.  These agile forms of working allow work to happen across organisational, departmental and disciplinary boundaries – something which is a challenge in both worlds.  I think Patrick Dunleavy illustrates the way the world is changing in this respect from an academic perspective rather brilliantly in this presentation on the Republic of Blogs.

Learning and Research Communities could provide a new type of environment in which learning and research, whether formal or informal, would take place.  The biggest difference would be support for networking and interaction outside of those more traditional activities.

Supporting a community would mean:
It is the community, and particularly the networking and sharing elements that provide the context for other activity to take place.  For practitioners these would be spaces where they can engage with academia without cost or commitment in the first instance, where they can gain awareness and find out about opportunities.  Perhaps most importantly spaces where relationships and trust can be fostered leading perhaps to joint projects.  Similarly for academics communities should provide a space for them to gain a more nuanced understanding of the needs, wants and concerns of those engaged in practice and to be able to adjust their own ‘products' accordingly, to be able to explain what they have to offer and to adapt quickly to changes.

Of course the cost of resourcing these communities will be an issue particularly as membership should be free wherever possible.  For me this requires working from a different business model, one where supporting communities is in some sense a loss leader for the other, more traditional, transactions that come after.  This is the way that many web 2.0 services now operate; a free basic membership with the option to migrate to premium charged services later on.

The piece by Orr and Bennett is a reminder that if we want to foster co-learning and co-research initiatives then first we need to have in place relationships of trust and understanding between individuals.  This cannot be done by a top down planning but requires putting our faith in something much less planned - something much more organic.  There are, no doubt, many examples of informal joint working already out there that can be used to inspire confidence that this is the way to go.  I suspect there are also already examples of Learning and Research Communities in action.

In summary, I think there are really exciting opportunities to be had if we take advantage of new ways of organising to fill the space between the town halls and the ‘ivory towers’ of academia.  I am also going to suggest a name; the University of Public Life.

My feeling is that it should be part of an academic's practice to engage in public discourse in their field. The social media tools you mention mean can facilitate this.
What I'm not sure about is how much more will be gained from the (in)formal communities you mention which need resourced. I think the new model should be to just get together and do what needs done. If you need resources for something specific then seek the money as you need it. There are all those crowd-funding tools which could allow help that process.
But setting up more bodies is more bureaucracy and more meetings. Instead let people build networks and make the existing meetings work better. Maybe some of them won't even be needed in the future.
Build the engagement into workflow.

I not trying to suggest something bureacratic although on re-reading the post does come across a bit like that. I do think that communities need some facilitating tho - although this should be (very) light touch. Take twitter 'chats' for example - and even unconferences need conveners. In fact I'd say a 'community' is a form of un-organisation. It doesn't need membership lists, minutes or a constitution but it does need a home, an identity (even something as simple as a hashtag) and someone to to facilitate.

You are spot on when you say 'build the engagement into the workflow' but, in my view, this needs the right environment to happen and that is what I think communities might bring.

In local government in particular I'm not sure that people are ready to be engaged.

Perhaps in the health world this is less of an issue and there is much more fertile ground for engagement to develop?

Well I wear two hats; that of medical educator/researcher/academic and that of doctor- GP to be specific.
So one of the best ways to cross these divides is to have people in both camps. Medicine is really rather unusual in doing this from what I can see.

But it is more complicated than that. Even with this connection much of medical research still does not seem to answer meaningful questions for practitioners. Have you seen this blog by @trishgreenhalgh on how less research is needed?
http://blogs.plos.org/speakingofmedicine/2012/06/25/less-research-is-needed/

In the world of medical education we have much less resource for research, but we all still need to be connecting and understanding and asking good questions.

I've been trying to work at building this kind of community myself in the last few years. I even presented at a conference about it last week- for the second time:)

It does take time but it's worth it. Tonight, as I've been writing this, a new blog has been started http://medicaleducationmatters.blogspot.fr/2012/07/why-arent-wpba-working.html#comment-form

A few weeks ago a junior doctor started this blog http://nhseportfoliorevolution.wordpress.com/

I think this is a small glimpse of the future:)